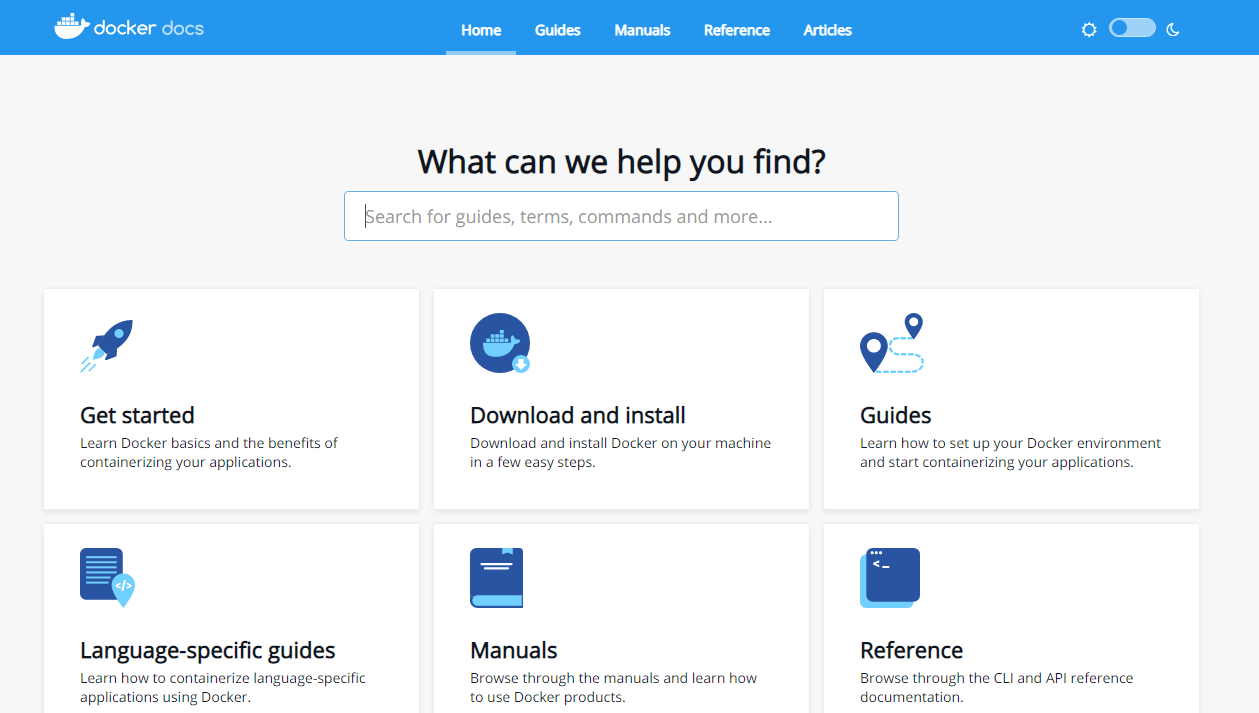 Docker is a free and open platform that allows you to create, ship, and operate application containers on a single operating system. It enables you to decouple applications from infrastructures, allowing you to deliver software more quickly. Docker hub can manage infrastructure in the same way that it can manage applications. Docker’s technique for rapid code delivery, testing, and deployment can significantly reduce the time between writing code and running it in production.

Having your own registry is an excellent way to enhance and integrate your CI/CD system. A commit to your source revision control system, for example, would trigger a build on your continuous integration system, which would, if successful, submit a new image to your registry. A signal from the registry would then initiate the deployment of a staging environment or alert other systems to the availability of a new image.

The next sections will lead you through Docker’s core features.

It is one of the primary aspects of Docker that allows you to configure the system more quickly and easily. This feature allows codes to be deployed in less time and with less effort. Since Docker is utilized in a broad range of contexts, the infrastructure is unrelated to the application’s environment.

Docker provides containers, which are used to execute programmes in a sandbox environment. Docker can run any type of program since each container is self-contained.

It boosts productivity by simplifying technical configuration and allowing for faster application deployment. Furthermore, it not only provides an isolated environment in which to run programmes, but it also minimizes resources.

Swarm is a Docker container clustering and scheduling tool. It leverages the Docker API on the front end, which allows us to control it with a variety of tools. It is a self-organizing collection of engines that allows for pluggable backends.

Services are a collection of tasks that define the status of a container inside a cluster. Each job in the Services section specifies one instance of a container that should be executing, and Swarm distributes it across the nodes.

It saves secrets into the swarm and decides which secrets to allow services access to, including a few crucial engine commands like secret inspect, secret create, and so on.

Container-based software delivery is considered to be more efficient. Containers are self-contained, portable, and have an isolated disc volume. This isolated volume travels with the container as it develops and deploys to different environments.

Docker makes use of software-defined networking. The Docker CLI and Engine allow administrators to build container-specific networks without touching a single router. Complex network topologies are designed and expressed in configuration files by network operators and developers. It also provides security benefits since the application containers can run in an isolated virtual network with regulated ingress and egress paths.

Ability to Shrink in Size

Docker has the capacity to lower the size of development since it gives a reduced footprint of the OS via containers.

Who is Docker for?

Docker, as a tool, assists both developers and system administrators, and so is a component of multiple DevOps (Developers+Operations) toolchains. It allows developers to concentrate on developing code rather than worrying about the system on which it will run. Furthermore, they would employ one of the hundreds of programmes already intended to operate in a Docker container as part of their apps to gain a head start.

Docker, in terms of operations, enables flexibility while also reducing the number of systems required owing to its minimal overhead and compact footprint.

We’ve gone over the top 11 Docker features that set it apart from the competition and contribute to its enormous popularity. It is well-known for having revolutionized development in the software industry, resulting in massive economies of scale. As a result, containers and Dockers have the potential to open up new prospects for your business.

Docker enables you to manage your infrastructure in the same way that you do your application. You may drastically minimize the time between writing code and executing it in production by utilizing Docker’s approaches for quick shipping, testing, and deploying code. Furthermore, its services, such as Docker Hub and Docker Registry, make Docker use more convenient.

Osmose Technology – All You Need To Know