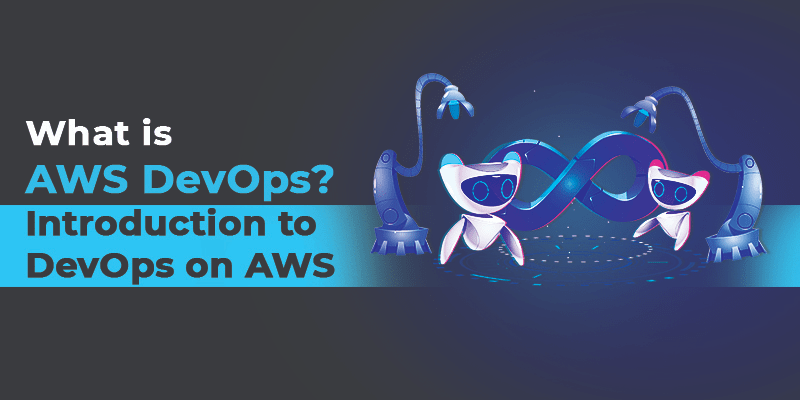 What Is AWS DevOps? Introduction To DevOps On AWS

Technology is evolving at a rapid pace, and so are the means to handle it. We have seen some of the most transformational years in terms of computing and the Software Development and Releases cycle. Many new techniques and modern methods have emerged in the IT sector like Cloud Computing, DevOps, etc.

DevOps has become important in the modern perspective, where a lot of emphasis is placed on quickly developing and deploying software, effectively cutting down the time to the market. To stay competitive, companies put their max effort into deploying software in clear timelines. Due to these clearly defined timelines, the system admin and software developer has become one of significance. For a fully functional and built software to be released in a clearly defined timeline, it takes a lot of effort between the development and operations teams. Get yourself registered in Intellipaat DevOps course to pursue your career in DevOps domain.

Within the development team, the developer has to develop the software, take care of security features, new features, and bug fixes. Earlier, a software developer waited for a long time after they sent the codes to the operations team to test and deploy. So they had no option other than to resort to waiting, and when the code did come back, they had to see through new features, services along with old code, and pending codes.

Another issue that popped up was the different environment between the development and the operations team, which created a lot of issues, as a developer is not that aware of the exact production environment.

Now talking about the Operations side of things. System Admins are responsible for the production environment uptime by managing the servers to cater to the present and upcoming products or services. With more and more demand for digital services, it puts a lot of pressure upon admins. Admins will manage more number servers now to incorporate these increased numbers of products and services. The operations team had to make the codes fit production environments. So all these issues trickle down to more delays in the deployment phase, and thus eventually more downtime that will hamper the business.

So there was a demand for fresh perspectives, and new methods to solve these emerging issues gave birth to DevOps. A new methodology wherein development and the operations team worked more closely without having siloes in between. This new culture stresses more on shared responsibilities, working with a common goal, and like a team.

DevOps is the new culture in SDLC to improve productivity and collaborations. Well, how does DevOps achieve these? You may wonder. The answer is Automation. DevOps automates all those processes that are redundant and repetitive and takes in much effort as it’s manual. With DevOps now, the companies can write smaller codes, undergo testing, monitoring, and even deployment within a matter of hours. Which earlier took days to get it rolling.

The other major invention was Cloud Computing, which brought a revolution within the IT industry. AWS or Amazon Web Services is the market leader that garnered a huge user base in the past decade. I will give you a little idea about Cloud Computing:

Cloud Computing is all about offering on-demand services that include a wide variety of services like computing, database, storage, analytics, networking, etc., to its users on a pay-per-use basis. This way companies, utilizing Cloud services save a huge amount of capital compared to their rivals who still use the physical server to manage their data and workloads.

AWS is from Amazon, an e-commerce giant which sells commodities online. They offer Cloud services in three categories:

What is AWS DevOps?

AWS DevOps is one of the best integrations out there, which offers the speed of the SDLC (software development process) and the flexibility of Cloud services. AWS offers a wide variety of tools that cater to developing software within a shorter timeframe. Some of these tools are:

Many tools are available for AWS DevOps, which speeds up the process of building and deploying software that has changed the way consumers interact with services and products on offer.

5 Things Successful Businesses Have in Common